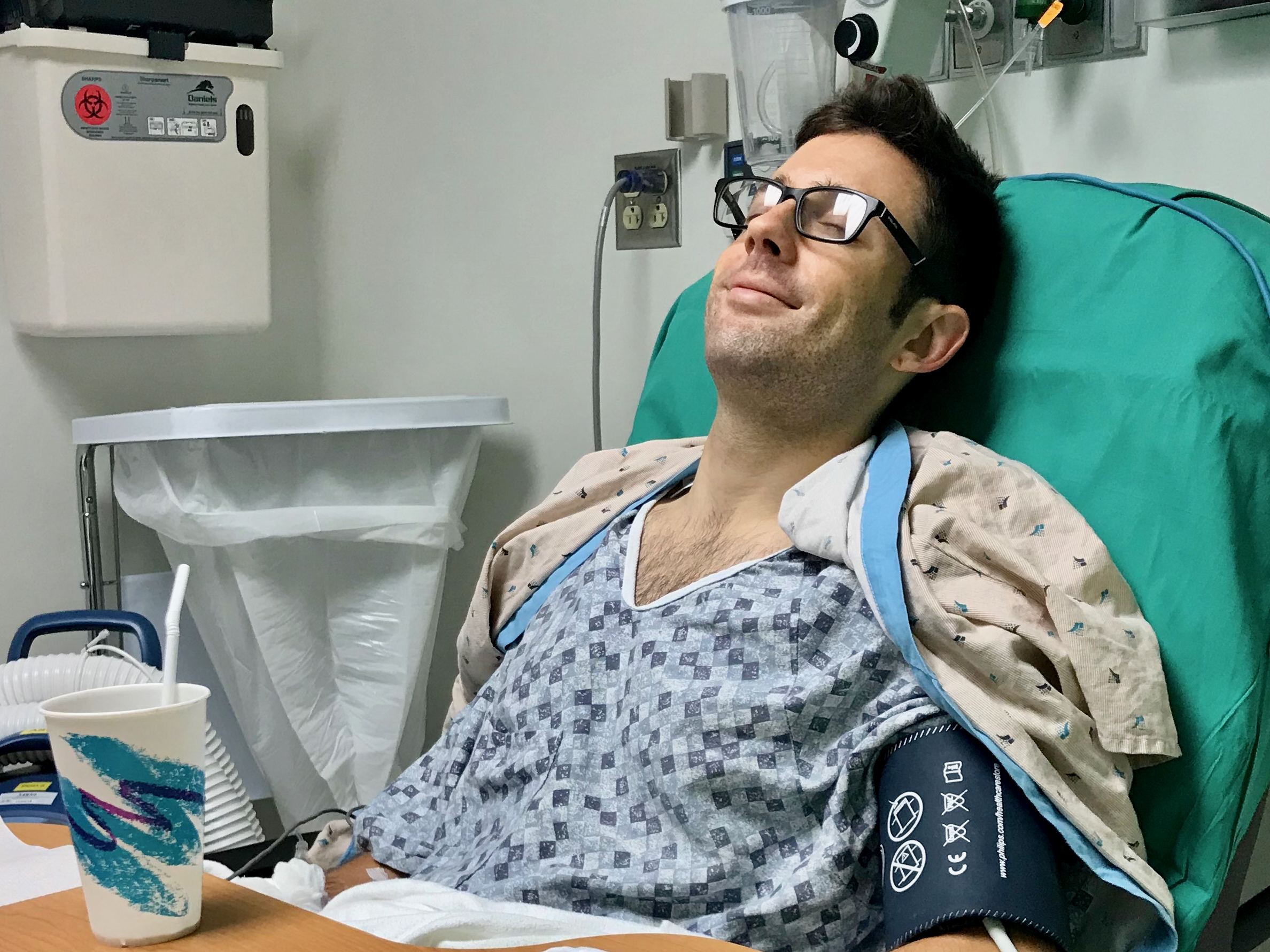 So my first REAL surgery was a pretty gnarly experience. I acknowledge I’ve already grossly exploited the opportunity to reference my genitals, especially considering I’m a 34-year-old man, but it’s a bit surreal. I guess that’s the last thing I’d imagine requiring medical attention, or at least I had hoped it would be the last thing requiring medical attention. That’s normal, right? I think most men would rather face a triple-bypass than have their trusty firearm within 10 feet of an unsheathed blade.

Fear of the unknown is a persistent bitch, but if one reminds themselves the general outcome is emerging out the other end alive and intact, even occasionally enlightened in some regard, it’s a moment to be relished. As stated previously, I wasn’t nervous about the whole deal, but failed to get any sleep the night prior anyway. Instead of surgery-related dread, work-related horseshit kept churning through my thoughts. Perhaps my mind was simply playing tricks on me, distracting from the fact that I was, indeed, nervous. Again, it’s new. It’s weird. And hell, going to the hospital under any circumstances serves as a reminder of one’s mortality, so I had to be just a bit. I just didn’t perceive it that way. I also tend to get pretty worked up about missing alarm clocks and what-not. I’ve always found it to be one of the higher forms of disrespect to be anything but punctual, especially when it concerns professionals on the clock.

We arrived at the University of Iowa Hospital around 5:45am and set up shop for 20 minutes or so in the waiting room. Andrea endured me as I criticized other peoples’ inability to respect personal space in-line at reception until we were called back into my room. Health insurance, AMIRITE? Talk about spacious and luxurious accommodations! A television with some soothing landscape shots rolling. The sounds of nature playing over the speaker system, enhancing the chill vibes. Courteous and nurturing staff. An abundance of fresh, warm blankets available at my beck and call. It was a fucking spa day. That is, until shit got real.

I’m sure this is familiar territory for most, but aside from trips to the E.R. due to dirt bike related mishaps, I’ve had little need for the health care system, so the slew of staff strolling through my doors and introducing themselves was surprising and overwhelming, but reassuring. When you’re being treated in the E.R. by people that typically have to deal with real problems, you don’t experience much sympathy for your plight when you ended up in your situation due to a meat-headed need-for-speed. These folks, however, were downright eager in their desire to care for me. It was delightfully flattering. I tried to remind myself of the hefty bill that would come due, but sometimes you just gotta say fuck it and enjoy the ride, especially when your soft parts are about to be in a very vulnerable position. I suppose it’s worth pointing out that I wasn’t indulging in the experience as much as I lead on. All the attention makes me uneasy and I’m generally uncomfortable with being tended to. On several occasions, Andrea had to put on her mom jeans and crack the whip to make sure I was communicating what I was needing and feeling.

That leads us into shit getting real. After I stripped down and got into the traditional garb, butt-cheeks clenched in the open breeze, surgery prep was officially underway. I got a little nervous as the nurse assembled everything for the IV, but needles and blood don’t typically bother me. Like I said, I haven’t endured any horrific injuries, but through my motocross experience, I’ve seen some shit. I think it was one part the whole unfamiliar thing and one part the fact that everyone seems to make such a big deal about IVs. Regardless, she gave me the “1-2-3” countdown and popped the needle right in. No sweat! I sat back and relaxed while the nurse continued going through her lengthy questionnaire.

Then things started deteriorating faster than I could assess what was happening. I became excessively hot. The room turned white and I was immediately light-headed. As the sensation escalated, the last thing I remember thinking was, “Should I tell the nurse what’s happening or just ride this bitch to the grave?”. Then the lights went out. Well, not completely. As my body started convulsing, I was vaguely aware of what was happening, but felt like I was observing it happening to someone else. Andrea says my skin turned ghostly pale, my arms curled into my chest and I went into a bit of a mini-seizure. The whole thing couldn’t have lasted more than five-seconds, but it understandably freaked her shit out.

I returned to planet Earth confused and disoriented, guided back by a voice I didn’t recognize. For a moment, I too was freaked. I had no idea where the hell I was or who this weirdo was that was jabbering at me. I couldn’t even decipher her words. As Andrea grasped my ankle, I snapped back as quickly as I had spun out. My reaction to what had happened was basically how I imagine Pauly Shore reacts to a bump of booger sugar. It was exhilarating…buuuud-dy! The nurse seemed reassured that I was amused with myself. I think Andrea wanted to punch me. They turned the fan on me, along with a moist rag on my forehead, and I was good to party in a few minutes. Now don’t quote me on the terminology. Obviously I was a little incapacitated and Andrea was a little emotional, but I think the nurse called it a “vasovagal reaction”, which she stated is common, particularly with men.

From there, shit was gravy. The long walk down the hallway to the operating room was slightly ominous, but I must have been on the table 30 seconds before I was lost in the land of anesthesia. I don’t even think they warned me. They always do the whole “count down from ten” deal on TV, but I got straight up roofied. I woke up two hours later, bewildered, shaved down and violated. Basically just as cool as I had always imagined being roofied would be. 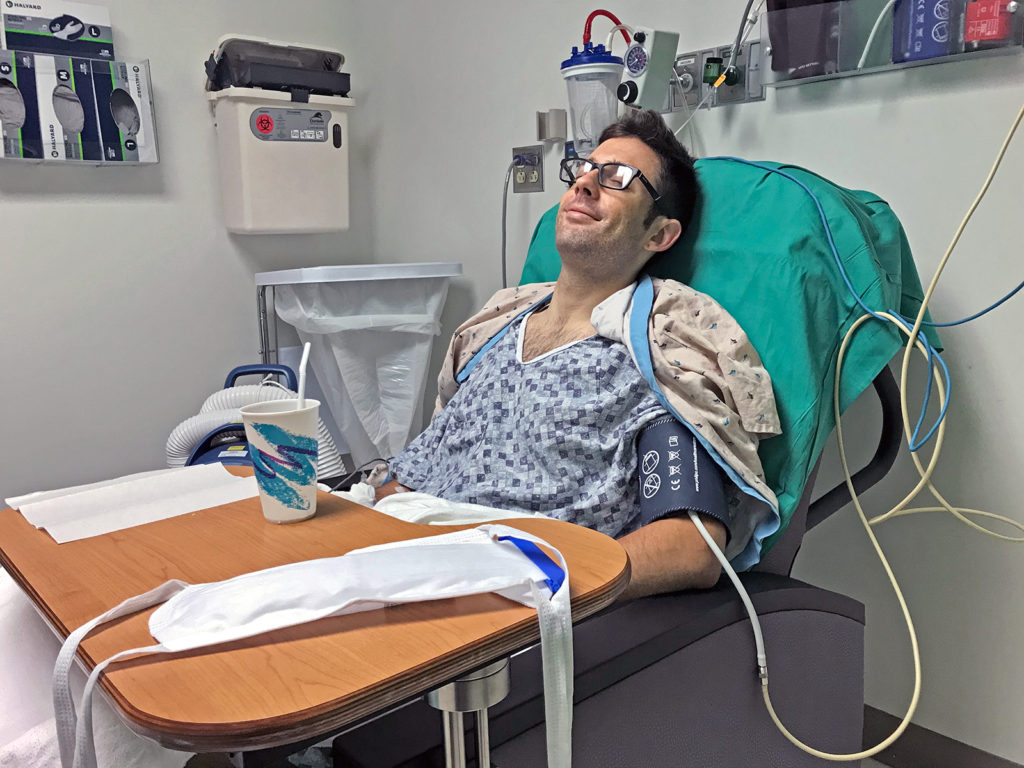 They returned me to my room, where Andrea was anxiously awaiting my return. I felt fucking great, but was surprised by my lucidity. I always see people talking gibberish after waking up from a good anesthesia trip, numbed by the best of pain drugs. Hell, Andrea was hilariously all over the road after her hysteroscopy. Don’t get me wrong…I was absolutely FEELING it, just not incoherent. Perhaps my only disappointment from the day.

So now I’m couch bound, desperately trying to embrace this opportunity to chill out. It all makes me quite anxious, especially when it’s so beautiful outside, but Andrea took off work so she could tend to me and it’s been undeniably great to enjoy the time together without worrying about our usual responsibilities. Her parents have each paid us a visit and her old man even brought over some Tomaso’s pizza last night, which is my kryptonite. Andrea’s mom brought me a post-surgery gift as well: a Darth Vader edition of the game Simon. She’s a peculiar woman at times.

That’s it for now. Doc says there’s a great chance my sperm count and motility improve in a few months based on all the other factors at play, but for now I just gotta focus on healing up and transitioning back into the working world. The past two days have felt like a week. Thanks again to everyone on the team for the love and support sent my way. I also want to thank all my sponsors, my mechanic, my trainer Fredrique, the boys on the team for all their hard work. It feels good to bring this one home and put us on top of the box.